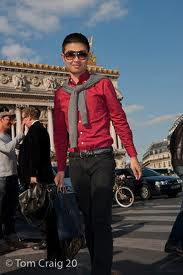 Chinese tourism in Paris is up 15% in the past year - with more than half a million people from China visiting the city in 2012.

After an attack on a group of Chinese tourists visiting Paris last week.
23 tourists lost their passports and €7,500 in cash when they were attacked by three men while leaving a restaurant at Le Bourget, in the Seine-Saint-Denis.

The group had just arrived in Paris for the first stage in a 12-day tour of European capital cities.

News of the attack reached the Chinese media via the embassy, prompting the state-backed Chinese Tourism Association to complain to their counterparts in Paris.

A spokeswoman for China Tourism, which organises French holidays for Chinese tourists, told Le Parisien: "We're hearing about attacks on the Chinese more and more often."


She said Paris had topped Rome as the European city where tourists were urged to be at their most vigilant. Another tour guide told the paper:
"Paris is a very dangerous city. There are lots of beggars and thieves. Of course my clients are afraid." Paris tourist office says visitor safety is a priority.
Its research suggests Chinese tourists are particularly targeted because they tend to spend high amounts - an average of €1,500 per person per stay - but also generally settle for budget hotels in less safe parts of town.